October has been crazy! I’ve had exams, submitted some major grants, went to Chicago and Argonne National Lab, and collected a lot of data. But I’ve found some time to relax (see photo, left)! I left off with my copper coating issues on the last post, and I’m happy to say that I think I have a pretty good idea of how to get a nice coat of copper on my gold tubes. The next step is to anneal it: heat the tubes up to over 1,500 degrees F to get the copper to “melt” into the gold and get evenly distributed throughout the tube so I have a copper-gold alloy. Then I can analyze it to see if I got the right amount of copper to reach my target of 2% and 4% copper-alloyed gold.

But that mini-project has been on the back burner for a few weeks as I was busy writing and preparing for a trip to Chicago over the long weekend that is Fall Break here at Michigan. In the suburbs of Chicago is the Argonne National Laboratory, a huge facility run by the University of Chicago. It was designated as the US’s first national lab in 1946 for research on nuclear reactions for the Manhattan Project in the post-war era. Argonne’s nuclear mission ceased in 1994 and has since been dedicated to scientific research, energy storage, national security, and sustainability. I go there to use the Advanced Photon Source, which is one of the world’s largest high-energy light sources: a synchrotron. It is a huge, donut-shaped facility that is over 3/4 of a mile in circumference – large enough to fit a baseball field in the center of the ring (see photo). It’s basically exactly like something you think of existing in a science fiction movie because the ring shape has extremely high energy light zinging around at nearly the speed of light. 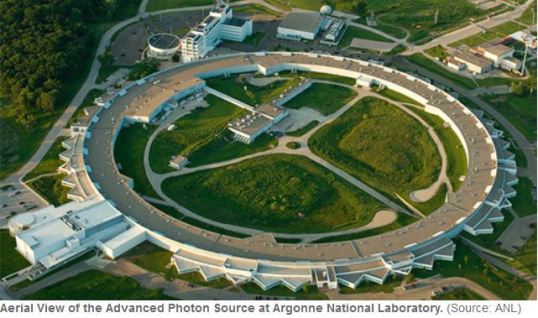 The high energy light is split off at 35 points around the beam (each of the little triangles on the outer edge of the circle in the photo) and used for a variety of analyses of materials. I use beamline 13 to employ the super fine x-ray beam to study the oxidation state of sulfur and iron in my samples. I need to use a very fine beam that can be controlled very precisely to determine if I have an oxidizing or reducing system in my experiments. This can really only be done at a synchrotron radiation source because it is very difficult to control the beam energy precisely enough to be able to “see” the different oxidation states of elements. It is an extremely cool technique and after spending three days there with people who know a lot about this technique was great. In those three days I only got to analyze three of my samples (~15 hours worth of time) but got so much data I don’t know what to do with it all! We collected some really interesting stuff and now I have the work to decipher all the graphs and numbers and get a geologic story out of it to explain the experiments.

I’ve also been busy collecting detailed composition data on my samples using the Electron Probe Micro-Analyzer here at the University of Michigan. This machine is also really cool and is used to get very precise compositions of tiny mineral grains. I’m basically using this technique to tell me exactly how much of an element is in each mineral phase in my samples so I can quantify how much the compositions change across the magma-magma interface during mixing/interaction. So between the new probe and synchrotron data, I have mountains of numbers and graphs to go through!

Besides staying busy with that, a few friends and I explored Chicago for a couple days before I went to Argonne National Lab. Chicago was a beautiful city with so much to see and do and I was happy to take a couple days to just relax and not think about work. I also got to go to my very first U-Michigan football game! Wow..that was an incredible experience. I couldn’t stop thinking about how almost the entire population of Fargo, ND, could fit in that stadium. There were so many people, I was literally overwhelmed for the first 20 minutes. The game was great, and Michigan ended up defeating Wisconsin. I was able to go as part of the Earth Department’s Alumni weekend, which was pretty cool. Talking to alumni and hearing about their career paths was very interesting and inspiring, it seems like people never end up where they expect and have a good time along the way.

This weekend kicks off Halloween celebrations. The first year office was decked out a couple days ago and the leaves are really turning colors in Ann Arbor. No snow yet, but it’s cool and crisp outside. I still feel as though I’m adjusting and think of how much I miss the west often, but Ann Arbor is an alright place with plenty of good people.